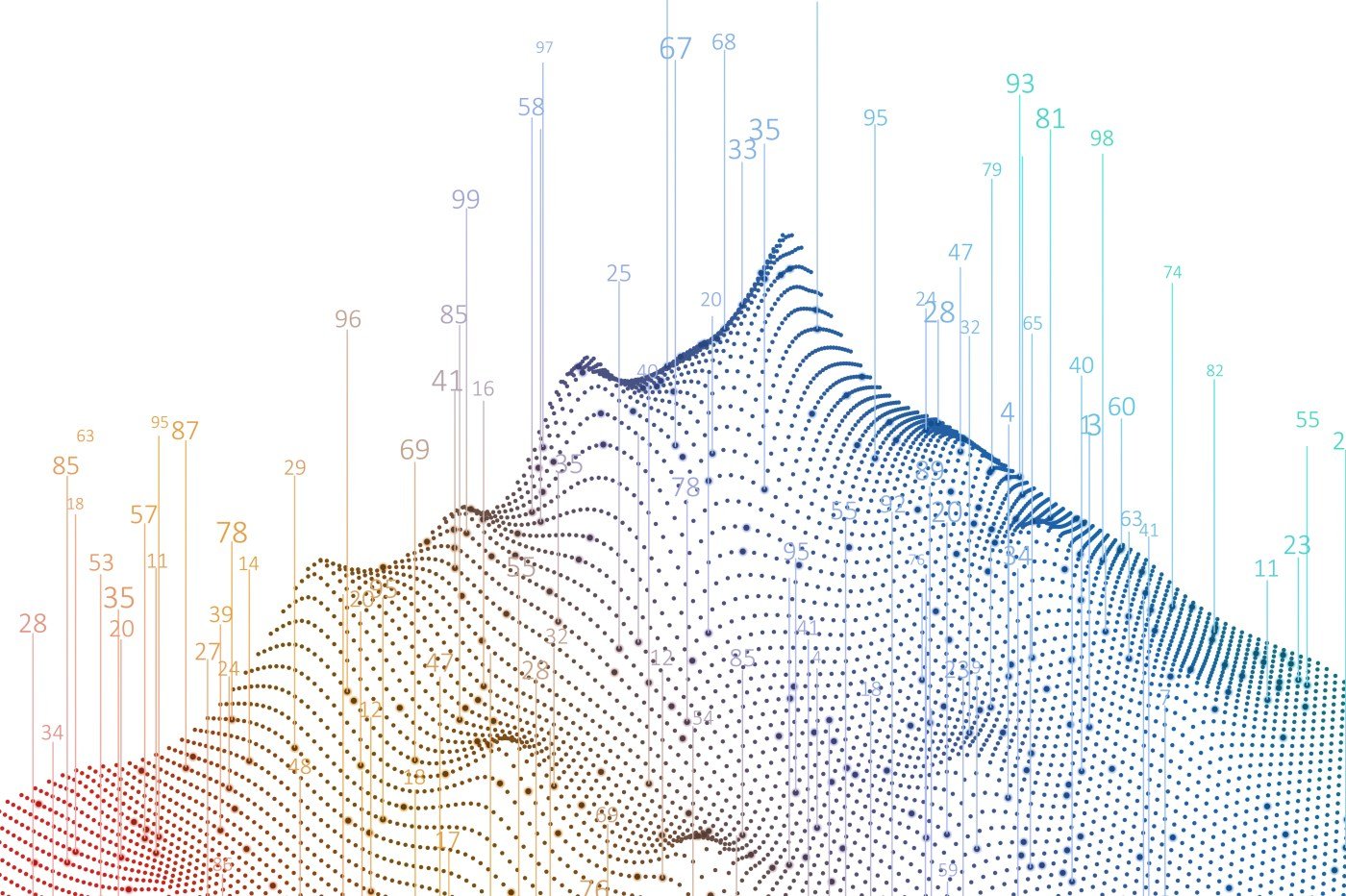 The coronavirus (COVID-19) pandemic is having a significant impact on businesses across the globe, including consumer packaged goods (CPG). At CircleUp, we are closely tracking developments in our industry using data from our machine-learning platform, Helio, to better understand the resulting changes in consumer behavior across categories, brands, channels and retailers in the United States. Amid widespread health concerns, federal travel restrictions and local shelter-in-place orders, shopping habits have rapidly and fundamentally changed, leaving the industry to adapt and rise to an unprecedented occasion.

By examining sales data for approximately 47,000 brands and mapping these data to nine parent categories across 1.2 million attributes, we sought to better understand how specific categories and segments are performing amidst COVID-19. We define category as a group of consumer products with similar characteristics (e.g. food). A segment, also referred to as a theme, represents a particular product or products within a category often characterized by a group of attributes (e.g. condiments and sauces), while an attribute is a specific quality or feature regarded as a characteristic or inherent part of a consumer product segment (e.g. chili, tomato, organic, meat, etc). By analyzing trends across these three groupings, we examined when the initial spike in sales occurred and what categories experienced the most growth during the spike period as well as which segments experienced the sharpest decline after the initial surge, which have returned to normal, and which are continuing to rise.

After significant pantry loading mid-March, shopping patterns have mostly converted to pre-COVID-19 trends with overall CPG sales having stabilized. Although there has been some variance across categories with demand rising dramatically for some companies, while for others, distribution channels and supply chains are under enormous strain, CPG as a whole has outperformed the broader market and we expect this trend to continue based on our analysis of how the industry has performed during prior downturns. By constructing a diversified portfolio, while also leveraging Helio’s capabilities in monitoring exposure and risk to various CPG categories, we remain confident in our business applications, even during a recession.

With that, let’s dive into the specifics…

Question 1: When did the initial spike in CPG sales occur? What categories experienced most growth during this initial surge?

As illustrated in the below chart (figure 1), clear stockpiling demand spiked in mid-March when shelter-in-place orders were issued across the country, most universities and colleges transitioned to online classes, and major sports leagues announced the suspension of their seasons. For the two weeks ending March 21, 2020, total U.S. CPG sales (in-store and online) increased $8.5 billion from the two weeks prior. For context, that is 15x the average rate of change for a typical two-week period. During this period, all categories (accessories, alcoholic beverages, apparel & footwear, food, household consumables, household durables, non-alcoholic beverages, personal care & beauty, and pet products) reached peak sales. Household consumables, such as cleaning supplies, toilet papers, and hand sanitizers, recorded record-breaking sales about one week earlier than other categories (up >100% in its peak week compared to the average sales in the same week in 2018 and 2019). As the number of COVID-19 cases increased across the country and local movement limitations were heightened, we saw a ripple effect trigger similar consumer purchase behaviors across other categories with some experiencing stronger growth than others. For example, average sales for food and pet products in March were 70% and 50% higher than their historic averages, respectively, while apparel & footwear was up approximately 25% and accessories grew just over 15% (figure 2). 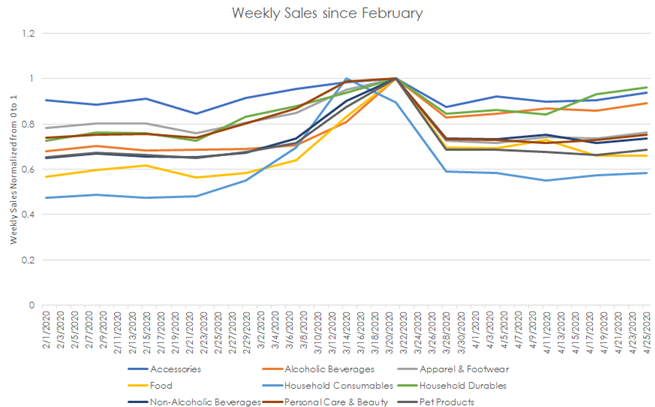 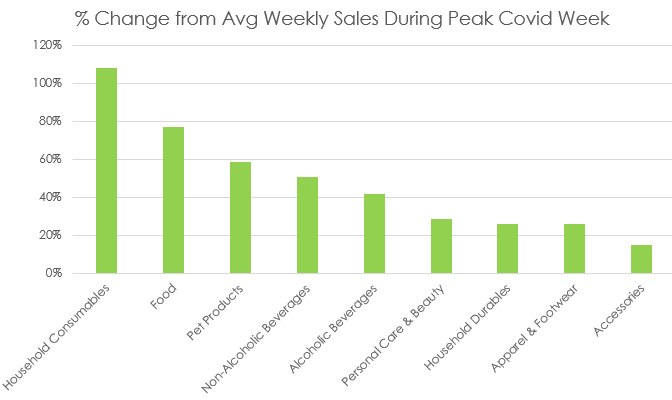 Question 2: What segments experienced the sharpest decline post COVID-19 sales spike? In other words, what products were “hoarded” in mid-March that led to sharp declines at the end of the month?

By ranking attributes based on the highest percentage decline in sales (i.e. highest negative dollar sales percentage growth) observed in the last two weeks of March, we found that most attributes appear to have experienced a sharp decline in sales due to an earlier surge. Segments such as cleaning & sanitation, infant related goods, paper goods, shelf stable dairy, as well as illness (i.e. cold/flu medicines) had been mass-purchased during the first two weeks of March and then declined sharply before eventually stabilizing at levels seen in February (figure 3). In fact, there has been no degradation in sales relative to ‘normal’ levels. 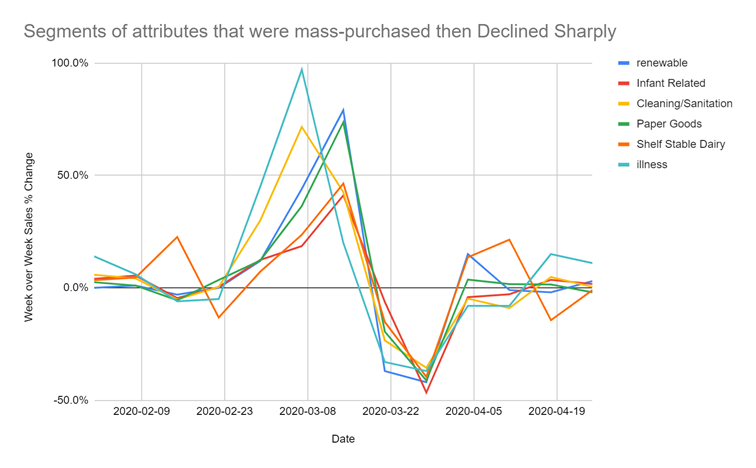 We ranked attributes based on the lowest percentage decline in sales (smallest negative dollar sales percentage growth) observed in the last two weeks of March to determine which segments stayed relatively flat during and post spikes seen mid-March compared to pre-COVID-19 levels. The vast majority of attributes were declining in the last week of March and hence there was no cap to exclude growing attributes. That said, some attributes were still rising in the third week of March, and therefore, a cap of 2% growth was placed to extract the relevant attributes. Based on our analysis, product sales attributed as hobbies (such as lawn and gardening as well as arts and crafts) as well as home appliances (kitchen utensils and other cookware) have remained fairly stable throughout the pandemic (figure 4). 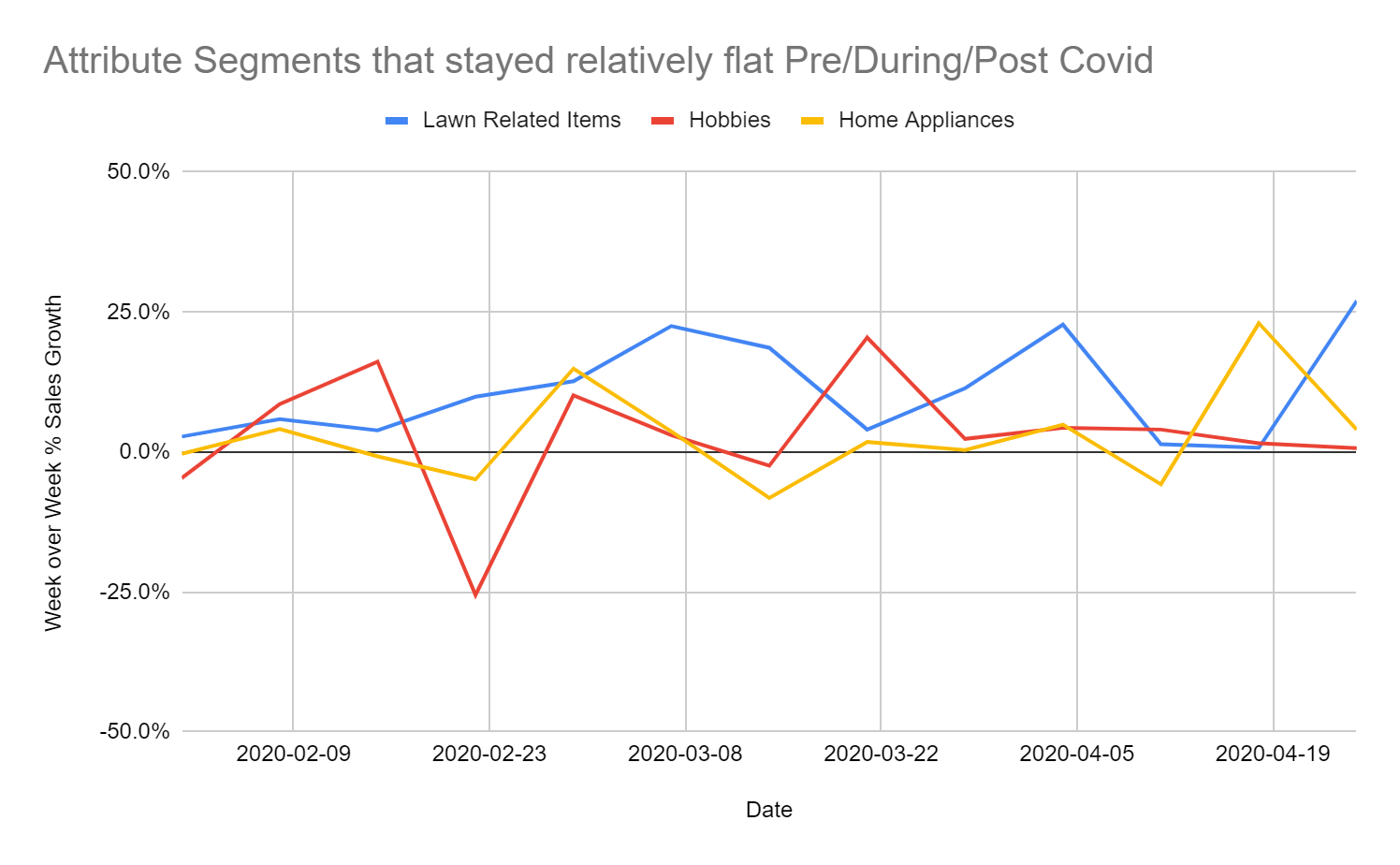 Question 4: What segments continued to experience growth even after the initial spike in mid-March?

The segments highlighted in the below chart (figure 5) each had consistently positive growth for the month of April and can be broadly divided into two groups. The first consists of segments for which weekly sales growth has been consistently positive over the past few months. Despite a dip in the later half of March, these segments are showing an overall upward trend in sales, such as cocktail ingredients (figure 6) and kitchenware (figure 7). The second group consists of attributes that suffered a heavy dip in sales in the later half of March, and despite their now consistent positive growth, have some ways to go for their sales numbers to reach pre-COVID-19 levels, including makeup (figure 8), a segment that saw the highest percentage decline in sales during the last two weeks of March, and energy drinks. Diving deeper, eye-makeup experienced a sharp decline, while basic moisturizer and skin care products did not decrease as sharply. Segments such as seasonings and sauces have a more nuanced overall performance trajectory. While certain attributes that fall under this segment, including barbecue sauce and organic turmeric, are showing consistent positive growth in April, others such as chili sauce or paprika/garlic have actually been in decline since mid-March (figure 9). 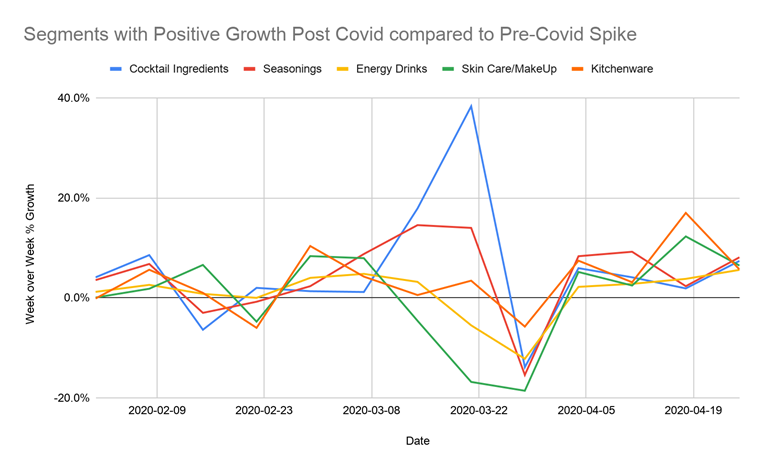 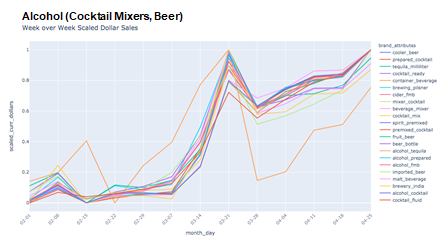 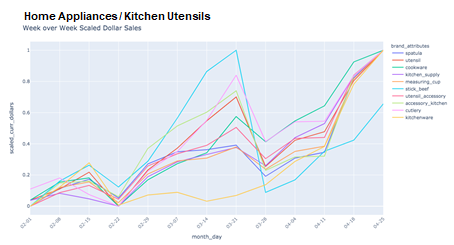 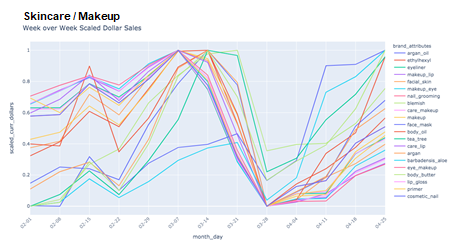 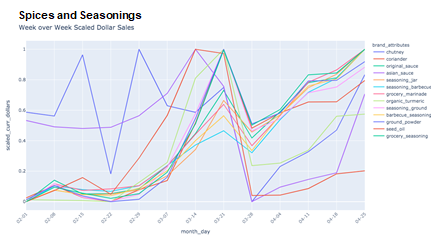 Question 5: Which segments experienced a decline in sales following the initial spike in mid-March?

The segments that experienced the highest decline in sales (week over week) following the surge seen in mid-March include brands with attributes classified as soups, breads, canned goods, pasta, and frozen foods (figure 8). Some of these attributes fall under segments that initially experienced significant growth and therefore are experiencing a consistent decline in sales as they return to normal levels, such as soups and broths. It is important to note that the same attributes did not necessarily show up under the ‘hoarding’ analysis previously discussed given the decline these segments experienced was more lagged across April versus a sharp decline that was seen within ‘hoarding’ categories. It is also possible that some of the decline in these segments is due to supply chain constraints. For example, bread and canned goods experienced hyper growth and still have sales levels significantly above pre-COVID-19 despite the consistent decline throughout April. Perhaps this is due to food suppliers and retailers struggling to meet consumer demand. 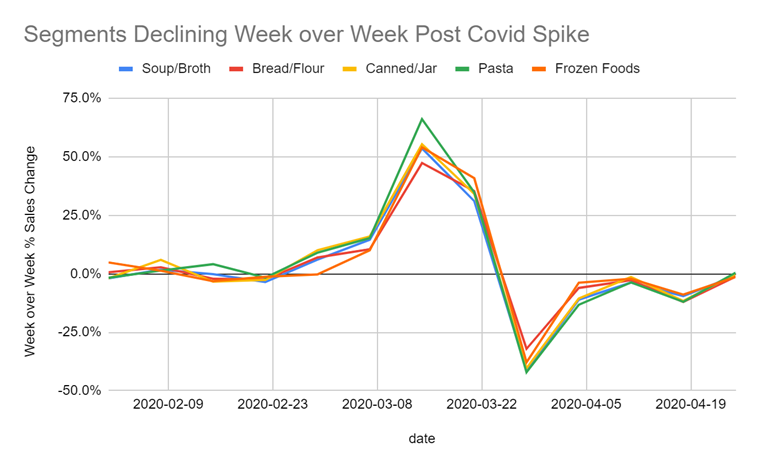 Question 6: What segments of the market are back to levels seen before the spike in sales in mid-March?

After a surge in CPG sales in mid-March due to pantry stockpiling, shopping patterns have mostly converted to pre-COVID-19 trends with overall CPG sales having stabilized. The majority of categories across CPG, including snacks, milk, hair and skin products, vitamins and supplements, cleaning, chocolate and candy to name a few, have normalized back to sales levels seen pre-COVID-19. Although a small subset of CPG categories have not yet returned to these levels, such as makeup, the majority of category sales are still on the rise. From baking to pet care and all the meal preparations and self care in between, consumers are trying many ways to solve for gaps in the products and services they now have limited (or no) access to.

As many markets across the globe begin to ease living restrictions and many consumers start to take tentative steps outside their homes, the world they are returning to is far different from the one they left in March. With significant new cases of COVID-19 still prevalent in many markets and threats of a second wave, any return to a new normal will take time for the vast majority of markets where the virus is managed but not eliminated. Increased in-home consumption is here to stay for the foreseeable future and CPG sales should remain elevated as stay-at-home behaviors linger. 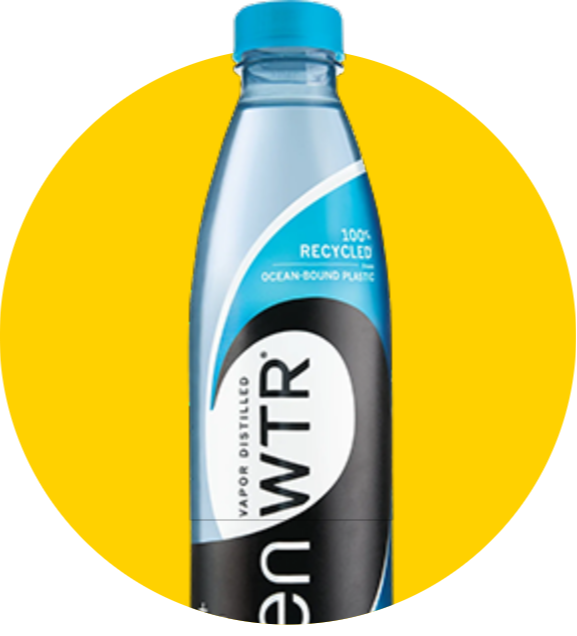 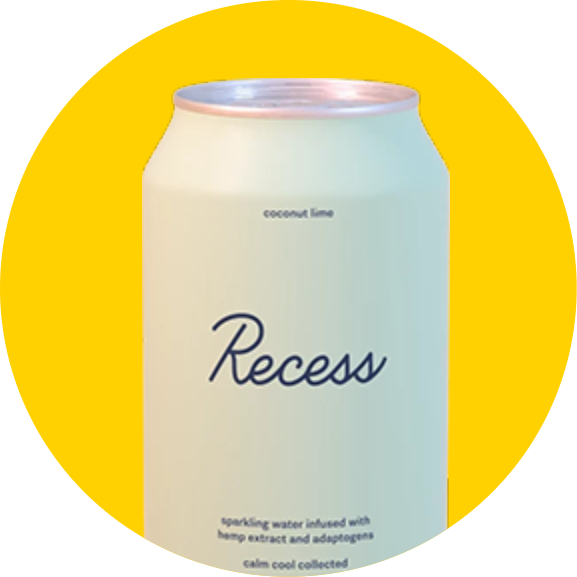 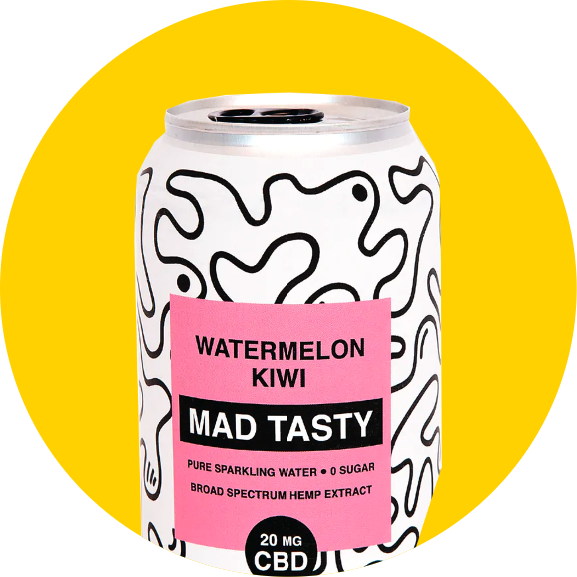 A water brand with an estimated revenue of $1-$5M 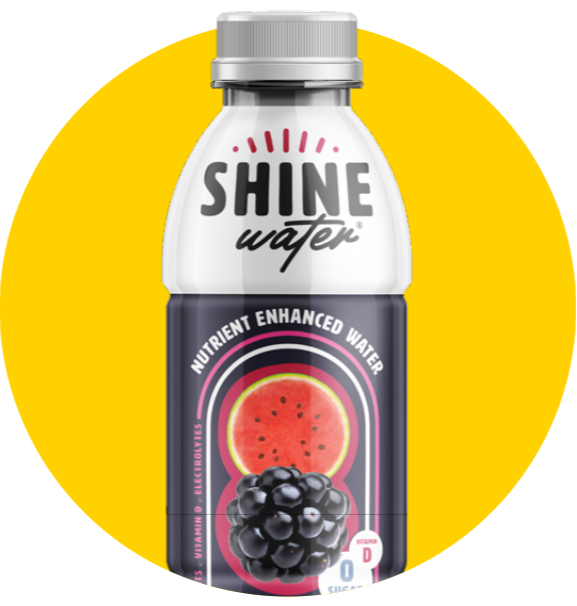 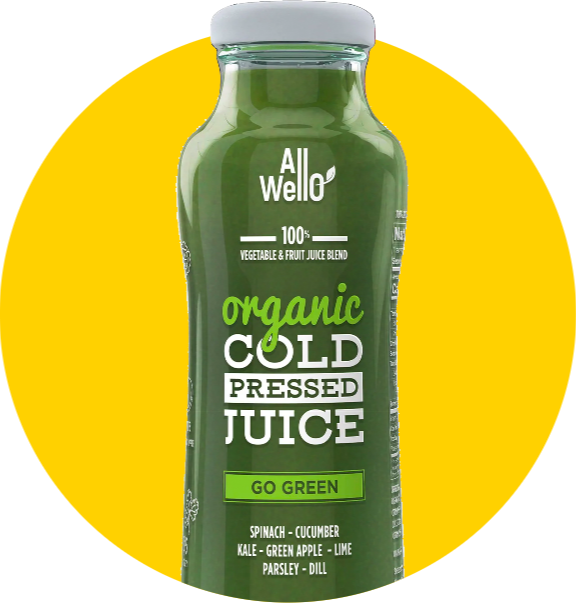 By understanding how these trends will impact the CPG landscape, you can position your business for success.

To learn more about Helio or get in touch, visit heliodata.com.